Communications protocols used for synchrophasor data have evolved over the last decade. Before the IEEE Standards Association (IEEE-SA) approved the IEEE C37.118-2005 standard for PMU measurement and synchrophasor communication in 2005, the realm of synchrophasor communications was an open playing field. SEL PMUs of that period relied largely on the SEL suite of protocols, specifically the Unsolicited Write Fast Message (UWFM) protocol, to transmit synchrophasor data. After the release of the standard, most SEL PMUs began adopting the IEEE C37.118-2005 protocol, while a handful of PMUs (i.e., the SEL-734 Advanced Metering System, SEL-311A/B Distance Relays, SEL-311L Line Current Differential Relay, and legacy SEL-351 Protection System) continued using UWFM as an exclusive transport mechanism for synchrophasor data. A number of modern synchrophasor application devices and software tools do not support legacy methods of synchrophasor data transmission. Therefore, to bridge the protocol gap between legacy devices and modern solutions, we turn to the RTAC. Supporting the full suite of SEL protocols as well as the IEEE C37.118 client/server protocol, the RTAC is an excellent conversion solution.

Figure 1 shows an illustration of a possible system configuration, including an SEL-351 Protection System, SEL-3530 RTAC, SEL-3373 Station Phasor Data Concentrator (PDC), and SEL-2407 Satellite-Synchronized Clock. The SEL-2407 Clock synchronizes the RTAC and SEL-3373 PDC to a highly accurate IRIG-B time signal. In this case, a serial connection links the RTAC to the legacy SEL-351 and provides a path for the IRIG-B signal. Serial connectivity between the SEL-351 and RTAC transports UWFM synchrophasors to the RTAC, and Ethernet connectivity transports IEEE C37.118 synchrophasors to the PDC. 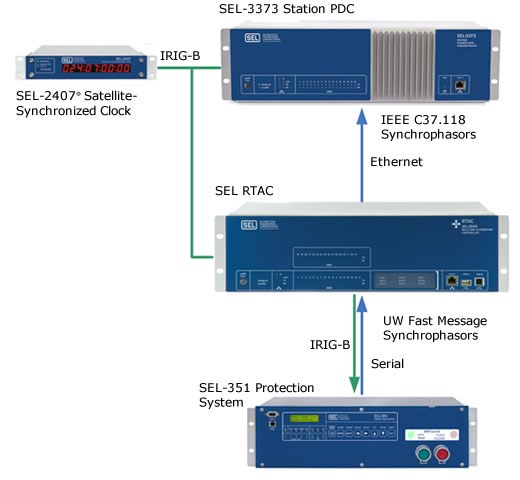 Table 1 displays the UWFM message format when used for synchrophasor data. Each message includes the phasor measurement (PM) data address that corresponds to the PMID setting in the relay. A message also includes the sample number, second of century (SOC), frequency, phasor data, and status indicators. These fields are specifically important for properly configuring the RTAC to map the data into its IEEE C37.118 server.

The following will provide a high-level overview of the necessary operations to convert a UW Fast Message for synchrophasors to an IEEE C37.118-2005 message using the RTAC.

Figure 2 provides a flow diagram that shows the necessary steps in the conversion. 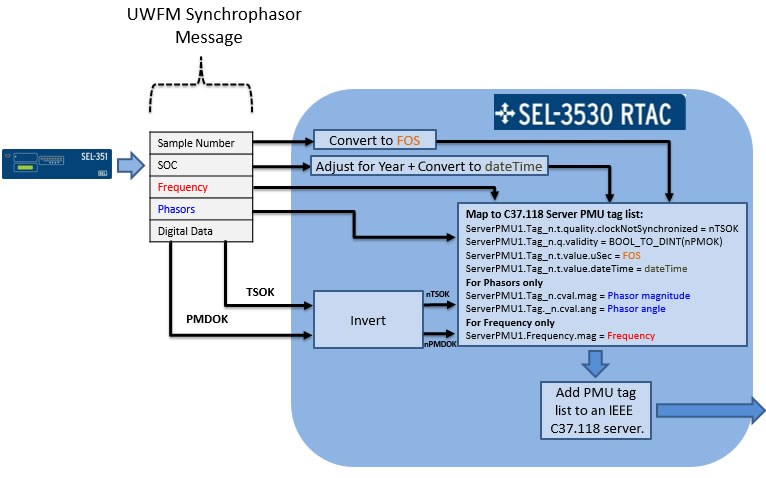 Although the IEEE C37.118 synchrophasor protocol is better suited for integration into modern systems, in some cases this is not an option. This issue of The Synchrophasor Report highlighted how UW Fast Message synchrophasors, combined with the functionality of the RTAC, can provide a means to integrate older technologies with new tools. This method guarantees that all SEL PMUs in the field can be used to provide accurate synchrophasor data for existing and emerging applications. Keep an eye out for an upcoming application guide on this topic.